Five women artists of Palestinian heritage from Gaza, Jordan, Australia, and the U.S. exhibit their performance, video, paintings, photography and sculpture. Art of Palestinian Women looks at the past and present to illustrate layers of Palestinian history. Portraits of Palestinians and those of other indigenous cultures, and vistas of ancestral lands show how art preserves and bears testimony to strife and joy in Palestinian lives. Using Tatreez patterns, Arabic calligraphy, Palestinian iconography and gold leaf, the colors and materials of Palestinian  culture are contemporized.

For Dana, the act of artistic creation is inseparable from notions of the real world. In times where socio-political changes compose an inherent part of our reality, she chooses to reflect the context within her work and consequently creates politically and socially engaged art. As a process driven artist, Dana uses raw concepts to define the rules of each project. Working from a small studio in Amman, Jordan, her work involves experimenting with material and is constantly evolving. she works with ink, coffee, thread, newspaper, plants, paint, gold leaf and collage to handcraft her pieces of work. Growing up surrounded by women who painted, sewed, designed and made art, Dana extends herself through artistry and has a long-standing fascination with detail.

Lux is a multidisciplinary artist from Sydney, Australia working at the intersections of digital photography, video, sound, dance, long durational performance and meditation. Lux’s approach investigates the inter-connectivity between transient, yet infinitely occurring circular paths of life, death and regeneration, oscillation between the collective feminine and masculine forces of our psyche, sacred and platonic geometry as the elemental source for all shape and material construct of our universe, the viscera, and the atoms of nature. Authoring for post human futures augmented by sensitivity and redefining what our humanity may mean in place of when subordinating to technology.  She graduated with a double major BA from Sydney University in art and performance and has studied digital film making at NYFA.

Manal Deeb is a Palestinian-American visual artist who was born in Ramallah, Palestine, and currently resides in the Washington, DC area. Manal’s work focuses on exploring and preserving her Palestinian identity, while at the same time attempting to reach a conscious happiness away from home (in exile).

Manal is a resident artist at the Workhouse Arts Center in Lorton, VA. She has had solo and group exhibits in cities across the United States and internationally in Palestine, France, Italy, Egypt, England, India, Qatar, Jordan, Pakistan, and Spain. Her artwork has been featured in both print and broadcast media around the world.

“My art is a record of my Palestinian identity and every viewer is part of my achievement.”

Born in the United States to Arab parents, Samar Hussaini seeks to visualize the layered challenges and enriching distinction of being a Palestinian-American and at the same time striving to create thought-provoking ideas of dialogue and hope.

Hussaini’s work incorporates layers of symbols and cultural icons connected to her Palestinian heritage. Icons such as the traditional Thob, a Palestinian dress which is notable for its embroidered designs, indicating regional identity and the practice associated with women’s self-expression in their community; the Keffiyeh, a traditional Arab head covering which holds the history of farmer, freedom-fighter, and activist, and is a symbol of freedom, hope, and a people’s fight against repression; And inspired by her father Hatem Hussaini, a political activist and leader who spoke about creating empathy and humanizing Palestinian’s, she employs his writings from over 30 years ago which still have context and resonate even today.

Malak Mattar, a 20-year-old woman artist from the Gaza Strip, Palestine currently attends Istanbul Aydin University in Istanbul, Turkey. She started painting in 2014, at thirteen years of age, during the fifty-one-day Israeli military assault on Gaza. Forced to stay inside for her own safety, she felt a compelling need to release all of her negative energy—fear, anxiety, and sheer terror. In the first two years, Mattar produced over 200 paintings. Her first international exhibition was in Bristol, UK, in 2017. Since then, her artwork has been featured in individual and group exhibitions in Jerusalem, France, Spain, Costa Rica, India, and in the Art Under Siege exhibit in the Rayburn House Office Building, U.S. House of Representatives, Washington, D.C.

Re-Imagining A Future is the opening exhibition at MPP of work by artists Ahmed Hmeedat, Manal Deeb, Mohammad Mussalam, Dalia Elcharbini, and Haya Zaatry — some of whom live in Palestine, and others who are part of the Palestinian diaspora. All of the artists in this exhibition explore a new and as yet un-imagined future for Palestine and Palestinians. They invite members of the Palestinian community worldwide to let their dreams for the future soar — as an act of imaginative courage, and as an act of creative resistance. These works invite Palestinians and others to look into the
future.

Ahmed Hmeedat grew up in Dheisheh Refugee Camp in Bethlehem. He is a self-taught artist who experiments with a variety of media, including watercolors, acrylic, oil, ink, and charcoal. Hmeedat’s art expresses the plight of the refugees and reminds people that the Nakba is an ongoing reality for Palestinians. Ahmed lives under occupation and restricted movement. He has created murals in the refugee camps in Bethlehem commemorating Palestinian leaders and activists who were killed by Israeli soldiers. These murals give comfort to the victimized families, providing inspiration long after the death of the figures they memorialize.

Dalia Elcharbini is a Palestinian-Canadian contemporary artist based in Canada. She was born in Kuwait and moved with her family to Canada in 2005. She has been exhibiting her work in Canada and the US for the past six years. Dalia describes her style as Surrealist Realism — an attempt to capture life-like subjects that are not necessarily human. Her body of work is recognized for one fixed element, which is her consistent use of gold leaf.

Manal Deeb is a Palestinian-American visual artist who was born in Ramallah, Palestine, and currently resides in the Washington, DC area. Manal’s work focuses on exploring and preserving her Palestinian identity, while at the same time attempting to reach a conscious happiness away from home (in exile).

Manal is a resident artist at the Workhouse Arts Center in Lorton, VA. She has had solo and group exhibits in cities across the United States and internationally in Palestine, France, Italy, Egypt, England, India, Qatar, Jordan, Pakistan, and Spain. Her artwork has been featured in both print and broadcast media around the world.

Singer-songwriter Haya Zaatry was born and raised in Nazareth, and now lives in Haifa. She is the co-founder of Eljam project, which aims to empower and enhance the Palestinian live music scene. She is also currently a graduate student in architecture. In her songs, Haya explores and challenges the boundaries of social, political and gender issues, especially those confronting Arab women artists. Since early 2016, Haya has been performing and creating music with Kevork Estephanian, while constantly exploring the space where Arabic words, ethnic rhythms, and the sounds of the universe meet. 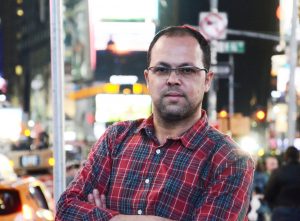 Mohammad Mussalam is an Assistant Professor at the Fine Arts College of Al-Aqsa University in Gaza. Musallam believes in simple and concise ideas taken and inspired from his daily surroundings. He embraces the idea that “fewer words that carry deep meanings are more effective than long texts and excessive elaboration”. In his art, Musallam focuses on the idea that preserving our humaneness amid the harshness of our environment is one of the most important reasons for our existence.